Nagarparkar, Sindh, Pakistan, Feb. 01:  Like every year, this winter too hundreds of kilograms of gum, illegally extracted from Camphora Mukal, the gum-producing trees, locally known as Gugral, by using poisonous chemical, were transported in trucks to Karachi, as the conservators of forests and wildlife in Nagarparkar area of South-Eastern Tharparkar district of Sindh province, one of the Ramsar sites, remained in traditional deep slumber.
None of the agencies stop these trucks and seize the illegally transported gum (resin) at the check-posts established in Thar Desert or at any other district throughout their 500km journey from Nagarparkar to Karachi, as the persons involved in this trade are influential who get the gum extracted through the hired local people.
Even the Pakistan Rangers, a paramilitary force, which has setup its check-posts in 100km area from Islamkot town to Nagarparkar turning it into a cantonment where nobody could enter or leave without its permission, have failed to stop this illegal trade. The Rangers’ presence is mainly being the area bordering India besides vast coal reserves found in Thar Desert near Islamkot.
This illegal trade started back in nineties and since then continues in connivance of officials of concerned departments, as the local social workers and environmentalists allege. “The district administration imposes ban under Section 144 on chopping of trees and illegal extraction of gum but that ban is effective only for seven days, a very brief period, which ends by the time notification reaches to the concerned officials for implementation,” Bharumal, coordinator of Society for Conservation & Protection of Environment (SCOPE) told.
The Nagarparkar area, having Karonjhar Mountain, spread over 16 miles, had thousands of lush and green Gugral trees, which increased beauty of the area besides providing fodder to the goats and other livestock, but now seventy percent of the trees have dried up, Salim Khoso, a local journalist, told.
“The Gugral tree, loved for its aroma during the rainy season, dries within six months after the resin is extracted by using poisonous chemical through cuts made with axes,” he added.
Salim Khoso told that since the tree bears resin in winter, this season suits the illegal traders who start their activities in December every year continuing till April. “The resin, traditionally used in Jain and Hindu temples for its aromatic peculiarity, is also used in medicines, cement and manufacturing the audio and video cassettes as well,” he added.
The gum is sold in Karachi at the rate of PKR.30, 000/- to PKR.40, 000/- (USD 353 to 470) per 40kg, which has made it a lucrative business for the local influential people, he said.
Tanveer Arif, the CEO of SCOPE, also expressed concern on illegal trade of extracting gum, and said his organization had been raising voice against it at different forums but all in vain. “These illegal activities are harming the biodiversity in the area, which has been protected by the laws of the country. If the Gugral trees continued drying up with this pace, it would speed up desertification and ultimately would cause natural calamity.
The SCOPE had also been raising awareness about the importance of Gugral among the local people and in this regard had organized a colorful Rakhi Bandhan festival last year during which the hundreds of women tied Rakhis (strip of cloth) to the Gugral trees declaring them ‘brothers’, Bharumal told adding that a number of non-government organizations had formed an alliance to launch joint struggle against the Mafia.
He said Tharparkar is one of the five famous eco-ranges of Pakistan but surprisingly Sindh Environment Protection Agency, Forest and Wildlife departments etc. are indifferent to saving this area which was to be declared as National Park.
IUCN, an international organization working on the environment, has enlisted the Gugral shrub, about 4 to 6ft height, in Red Data List. The Gugral tree in 2sq km area yields 100-120 Maund (1 Maund=40kg) resin weekly. Since the tree releases resin normally in small quantities, the chemicals are used to extract it in bigger quantities. 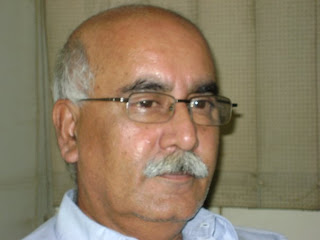 The author
Posted by Aziz Narejo at 5:11 PM