Indus Herald report:
The story of the Sindh Education Foundation, SEF, depicts the ineffective and ill-planned policies of the government of Sindh & its various institutions in the field of education. The performance of the Sindh Education Foundation, as reported here, also betrays the failure of the government to implement any major projects in education or other fields.
While emphasis is given these days on not to re-hire retired people or give them extensions, an educationist in her 80s is allowed to head SEF. As SEF is to mainly work in the rural areas in Sindh, its head would be expected to tour intensively the outlying districts of Sindh to know the peculiar requirements in the field. But the octogenarian simply can’t keep up with the demands of the job.
It is not the objective of this report to cast any aspersions on an honorable educationist but there must come a time when she should be given an appropriate award for her illustrious services and honorably retired. Someone more up to the job must replace her. 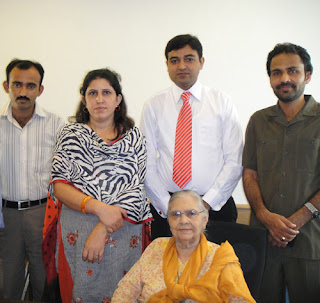 The Sindh Education Foundation is running two major programs to promote education in the province. Under the programs, subsidy based schools are to be opened in various areas. One of the programs is called Public Private Schools in Rural Sindh (PPRS). It is to promote low cost public private schools in rural Sindh. The project supported by the World Bank, has billions of rupees at its disposal. The PPRS is supposed to launch 1000 schools in four years in ten districts namely, Larakan, Khairpur, Dadu. Kamber Shahdatkot, Nawabshah, Sanghar, Umerkot, Mithi, and Badin.
Private sector is to be involved in the project and entrepreneurs would be encouraged to open schools in the areas with no government school in a 3-kilometer radius. Each school should have at least 70 students below 8 years of age. SEF is to pay a subsidy of Rs. 350 per student. The subsidy will be increased to Rs. 450 in case 80% of the students would be girls.


The main flaw of this program is the introduction of Oxford University Press books in these schools while these schools are opened in very remote area of Sindh where it is hard to find even matriculate teachers. Hence the bar has been lowered and Middle School pass candidates would be employed to teach at a salary of Rs. 3,000 only.
Although they will be imparted a brief training, they can’t be expected to teach the students Oxford University Press syllabus. That will be a big blow to the whole program. On the top of that the teachers are not paid salaries on time, sometimes for periods of over three months, as the government does not release subsidy funds on time. This discourages teachers as well as entrepreneurs involved in the program. There is also no proper supervision of the schools and no surprise visits to record progress and ascertain the attendance at the schools. The books are normally dumped at SEF offices and there is no mechanism to properly distribute them among the children.
The parents are worried at the state of affairs and for the education of their children having no say or any interaction with officials administrating the program.
Another failure of SEF is evident from the fact that in the first two years, only 300 schools have been launched while under the program 1,000 schools are to be opened in four years.
The other major program being carried out by the SEF is the Integrated Education Learning Program (IELP). Under this program, 1,200 schools are to be opened in 23 districts. It is also a subsidy-based program but so far it has proved to be failed program as well and a waste of funds.

This program is totally centralized. It may sound ridiculous but under the program, if a computer breaks down in Umarkot, a technician has to travel from Karachi to fix it. Most of the maintenance contracts are said to have been awarded to a relative of a director of SEF.
Gross mismanagement and inefficiency is witnessed from top to bottom at the six regional offices at Hyderabad, Larakana, Khairpur, Nawabshah, Mirpurkhas, and Dadu.
There is great need for restructuring and revamping of these two programs. Officials need to be appointed on merit and the programs need to be decentralized. Otherwise it would be gross injustice to the cause of education in Sindh and waste of hard to come by resources. The government needs to take immediate steps to rectify the situation. 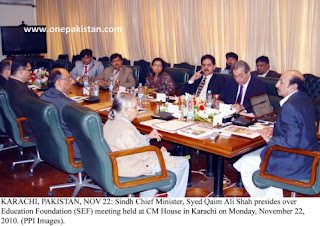 Revolution in Pakistan? Is It Possible? 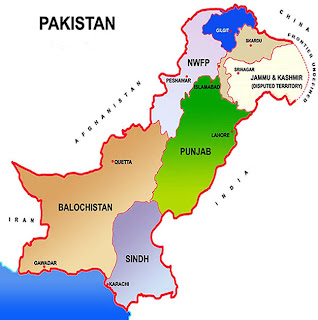 One hears about a call for revolution in Pakistan every now and then. Recent uprising in the Middle East and Northern Africa has given an impetus to such sentiments in Pakistan. But is a revolution really possible in a country like Pakistan, which is home to divergent and dissimilar cultures and where people are constantly at loggerheads on different issues?
The question can also be appropriately answered if one knows ‘what’ kind of revolution its proponents want.
It is not easy to call for and build a consensus for a revolution in the countries which are not ‘nation states’ or homogeneous. One should be realistic and very clear on this subject. For all practical purposes, Pakistan is a multi-national country. It is home to different people who have distinct cultures with their own languages and history. Their interests are in conflict with each other and they even have their own heroes. Heroes of some are villains for others. How can such a divergent country stand united to fight for a revolution?
Pakistan received a major setback when at the initial stages, the indigenous people and their languages & cultures were completely ignored and outside culture and language were imposed on the country. Resentment to such move was natural. The undemocratic moves to overthrow provincial governments in the initial days in East Bengal, NWFP (now PK), Sindh and Punjab at the whim of the Central government & forcible annexation of Balochistan were harbingers of what was in store for Pakistan.
Many people are of the view that the first blow to the foundation of the country came when the founder of the country decided against giving Bangla Bhasha the status of a national language of the country. Soon after that, students in Dhaka were fired upon resulting in several casualties when they congregated to demand the natural right for their language. That set in motion a process that ended in 1971 in the dismemberment of the country.
Similar policies have been pursued in the present day Pakistan denying the provinces their due rights. Wrong policies of the past 63 years, continued oppression of the people from the smaller provinces, especially Sindh & Balochistan, usurpation of the provincial resources and frequent military dictatorships have harmed the country beyond repair. Whatever problems the country is facing today are direct result of such policies.
Now the situation is coming to a head. The country is completely divided. It has become impossible to unite the whole country on a single agenda. In such a situation it seems highly impractical that people will unite on a call for a revolution. There is complete lack of trust between different stakeholders.
On the contrary, it is highly likely that if the longstanding ‘national question’ is not solved to the satisfaction of the constituents and the provinces are not accorded the rights as promised in the famous 1940 Lahore Resolution which came to be called ‘Pakistan Resolution’, then there is a real time possibility that the country may soon face disintegration.
Posted by Aziz Narejo at 8:21 PM 2 comments: Links to this post 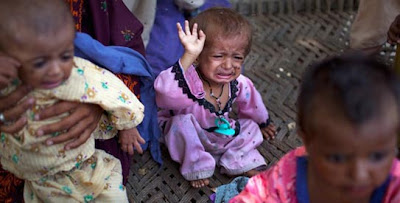 ISLAMABAD: Pakistan’s Sindh province, hit hard by last year’s floods, is suffering levels of malnutrition almost as critical as Chad and Niger, with hundreds of thousands of children at risk, Unicef said on Wednesday.

A survey conducted by the provincial government and the UN Children’s Fund revealed malnutrition rates of 23.1 per cent in northern Sindh and 21.2 per cent in the south.

Those rates are above the 15 per cent emergency threshold set by the World Health Organisation and are on a par with some of the poorest parts of sub-Saharan Africa.

Northern Sindh also had a 6.1 per cent severe acute malnutrition rate and southern Sindh had 2.9 per cent, both far above the WHO thresholds.

“We are looking at hundreds of thousands of children at risk,” Unicef chief of communication Kristen Elsby told Reuters.

A full report would be released on Friday by the Sindh government, she said, along with the province’s response plan.

Elsby said it was unclear if the August’s floods had caused a spike in malnutrition, but that it had revealed the extent of the problem because babies and mothers were being screened for the first time.

“People were already vulnerable and this kind of kicked the chair out from under them,” she said.

Six months later, many communities in Sindh are still surrounded by floodwaters. In Sindh and Balochistan, some 600,000 people are still living in temporary camps, according to the World Food Programme.
Posted by Aziz Narejo at 1:05 AM No comments: Links to this post