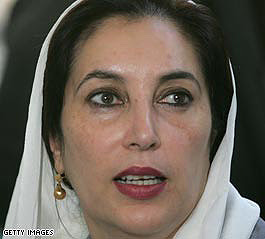 Her father, Zulfikar Ali Bhutto, founder of PPP, who served as president and Prime Minister of Pakistan in 1970s was overthrown by the Army and murdered by generals and judges. But at least his blood didn’t go in vain. Like the incident at Karbala, it gave a new life to his party and helped it withstand the most repressive military dictatorship of General Zia and later get electoral successes to form governments twice in Pakistan.
But alas, it could not be said of his daughter, Benazir Bhutto. She had nominated military dictator, General Pervez Musharraf, the then Chief Minister of Punjab, Choudhry Pervaiz Elahi, former Intelligence Bureau (IB) chief, Ijaz Shah (who was also ex-army officer and an operative of Pakistan’s Inter Services Intelligence, ISI, a formidable military intelligence agency), along with some others in case anything happened to her.
The government that came into power on a sympathy vote after her tragic assassination led by her husband Asif Ali Zardari, bid farewell to General Musharraf with full military honor and a salute. The government elected and being run in her name, is not pursuing her murder case appropriately and despite clear and repeated orders by a court hearing the case, it is doing nothing to get the former military dictator extradited to the country to face the trial where he faces charges as an accused. A UN probe had also held him responsible.
The government is also not taking any action against Ijaz Shah and now it has entered into an alliance with PML-Q, which PPP leaders earlier had dubbed as Qatil (murderer) league, meaning it was implicated in Benazir Bhutto assassination. As if that was not enough, Ch. Pervaiz Elahi, a man nominated by Benazir Bhutto herself is being appointed as the Deputy Prime Minister. Now would a Deputy Prime Minister allow any investigation against him in a murder case?
Isn’t it true then that Benazir Bhutto’s blood has gone in vain? Khoon-e-Naahaq" gone "Khoon-e-Raigaan? The people who have her blood on their hands are either already in the government or about to join the government while others are living abroad under government security!