Contempt for America & love for Taliban: a lose, lose proposition! 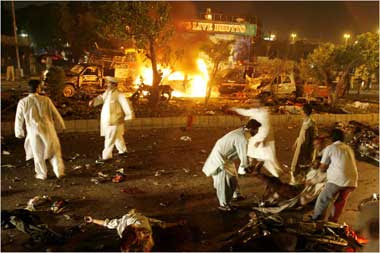 Why do many people in Pakistan (& of course "Muslim Ummah") hate America? It is not mainly because US supports military dictators or kings & Emirs in the "Muslim Ummah" or for the "American imperialism". It is mostly because of American "policies" towards "Muslim Ummah", its support for Israel vis-a-vis Palestine, its invasion of Iraq & Afghanistan & subversion of Pakistan's sovereignty.
But if Pakistanis really care for their sovereignty, then why don't they object to the blatant interference by Saudi Arabia, Iran & various Emirates in Pakistani affairs & the intrusion by foreign warriors who use Pakistani soil to carry on their Jihad?

We see so many people killed & maimed in Pakistan so frequently by the Taliban. They use Pakistani soil to plan attacks around the globe & harbor terrorists in Pakistan. Why many people in Pakistan still express love for such barbaric killers? What message Pakistanis send to the world? The two don't just add up nor do they envisage a win win situation for Pakistan.
Posted by Aziz Narejo at 9:04 PM