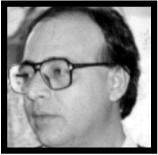 … the general impression about the governance in Sindh is not only extremely negative, but such conditions have generated unemployment, greed, crime, loot and plunder of state lands, disregard for merit and fair play.


HYDERABAD, February 5: Dozens of flood-affected villagers belonging to Shahdadkot district's various villages marched alongside their womenfolk for over 70 kilometers during last couple of days and finally reached on Friday at the mausoleum of their Shaheed leader Benazir Bhutto and protested against the apathy of the authorities, which have miserably failed in the task of their rehabilitation.
This symbolic demonstration in Gharhi Khuda Bux actually depicts the plight of millions spread along the banks of Indus uprooted last year by the devastating floods, which rendered them not only shelterless but washed away their crops, cattle and almost everything they possessed. Right from Jacobabad in the north to Thatta on the shores of Arabian Sea, the flood-hit people are facing hunger, disease and deaths of their dear ones.
The apathy of the authorities under Chief Minister Sindh Syed Qaim Ali Shah's administration is unparalleled as these millions are rotting for food, reconstruction of their homes, seeds and fertilizer for cultivation of new crops but to no avail.

Hence, yesterday's march. The protesters did gather at the mazar of Shaheed Benazir but did not make any appeal to the government, they instead drew attention of the Chief Justice of Pakistan with the request to order an inquiry as to which powerful politicians in various places have deprived them of their due share in the aid package and the so called Watan Card. 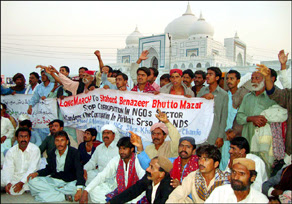 "Since the Sindh Government is not listening to our voice, we decided to long-march up to the mazar of our leader, record our protest and make a request to the honourable chief justice Iftikhar Muhammad Chaudhry to come to our rescue," commented Ghulam Sarwar Sarki, a well-to-do landowner now turned pauper.


He complained of massive bungling in the supply of the seeds, fertilizer and even Watan Card, accusing that a majority of the rightful affectees have been denied these essentials and local influentials and party high-ups have cheated the common folk.


Apart from the plight of the flood-affected people, the whole province of Sindh is beset with complete breakdown of law and order, daylight robberies, kidnapping for ransom, Karo-Kari killings, unmatched nepotism, rampant corruption in revenue, police and almost all other departments of the provincial as well as the federal government.


Another major issue hitting the headlines is the bulk re-employment of retired employees, some of who have contrived to get five years of extension in their service, which is unheard of, and without precedent in our bureaucratic history. These crony-like officers range from grades 17 to 21. For instance, the Director Generals of three major organizations namely, Lyari Development Authority, Malir Development Authority, Lyari Expressway and Project Director, Bhitshah had retired some 3 to 5 years ago.

They remained blue-eyed boys of General Musharraf and former Prime Minister Shaukat Aziz also and now are enjoying the same lubricant positions under PPP government. The magnetic pull these bureaucrats possess might have pleased our rulers, but the people of Lyari and Malir have been thrown at the mercy of the land mafias, which are obviously sheltered and protected by our police bosses.


Hence, the general impression about the governance in Sindh is not only extremely negative, but such conditions have generated unemployment, greed, crime, loot and plunder of state lands, disregard for merit and fair play.


Pointing finger at the judiciary's intervention or intrusion may be easier for our politicians but their rude behaviour with the voters specially after the martyrdom of Benazir Bhutto, has weekend the ruling PPP's foundation in its own home province. Had the administration sincerely and seriously attempted to resolve the day to day problems of the poor, the people will not need invite the attention of the judges towards the injustices meted out to them at the hands of their elected representatives, the powerful feudals and the ruthless police force.


It’s a conventional wisdom that perception is always stronger than reality. So the common perception about our politicians, specially the ruling party leaders is fast creating inaccessibility and annoyance as its corollary among the masses. The talk of the town is, "if you go for work to Karachi, you will get killed by the urban terrorists or target killers and when you want to live in peace in the interior of Sindh, your life will be ruined by dacoits and kidnappers".


It will be in the fitness of the social conditions, that certain bold steps are initiated by the PPP stalwarts at the provincial level to arrest the looming despondency and disillusionment which now writ large on the faces of our poor. The PPP's sole asset has been the common man's blind faith in leadership of the Bhutto family. President Asif Ali Zardari, who has inherited the mantle of this great leadership, must not fear the parallel force of the establishment because he can attract millions of poor folk's goodwill through meaningful reforms and schemes of public welfare.


When President Zardari grumbles about parallel or shadow government run by the establishment, always eager to topple the elected democratic regime, he perhaps overlooks the facts that the times have changed and any establishment, howsoever powerful, can not dare to interfere directly, as long as the elected authority commands popular support and that kind of public backing can be regained with sincere and honest reforms to address the basic socio-economic problems of the toiling millions.
Drawing an analogy, the history will judge President Hosni Mubarak of Egypt as culpable for giving room for maneuver for the downfall of his regime.
Posted by Aziz Narejo at 11:52 PM