Worrying About "Memogate"? How about "Veenagate" Now? 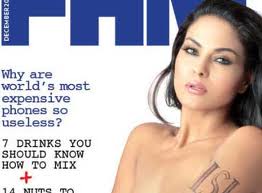 So you have been worrying too much about the so-called memogate? How about "Veenagate" now? Controversy-prone Pakistani actress, Veena Malik is in the eye of another storm as an Indian fashion magazine, FHM, has published an almost nude picture of her on its cover. What may be more disturbing for the pseudo patriotic elements in Pakistan, including the sleuths, fundos, IK, MNS, Choudhry Iftikhar & others, is an unpardonable sin of sporting a tattoo on her arm, reading ISI!

VM says the photos are 'morphed'. FHM says pictures are genuine & they have proof including a video of the shoot & emails from VM.

So will the ultra patriots go to Supreme court now against this actress blaming her of defaming the country? And more sinful at that, doing so in the "enemy" country? Or will Choudhry Iftikhar take a suo mottu notice? God may be with this poor actress & save her from vultures in "Pak Vatan".
Posted by Aziz Narejo at 9:41 PM